To answer this question, 15 iPhones have been introduced to the world so far. In fact, Apple is coming out with some new phones this Fall. The 7S and 7S Plus are basically an updated version of the iPhone 7. So it’s refreshed and that’s about it. Then there’s another phone. The name isn’t final, but it’s either the iPhone Edition or iPhone 8. This is a big year for Apple. It’s been around 10 years since the first iPhone. Let’s look at the history.

The original iPhone was released to the world on June 20, 2007. Basically, it connected three different devices into one. A iPod, A Phone, And an Internet Communicator (Safari). It was so technologically better than Samsung, LG, the whole lot. Steve Jobs in the Keynote said that the problem with every phone, the bottom half, had a keyboard. And once it’s shipped, it’s done. No more changes. When you have a good idea, you can’t just change a button. So, guess what they did. They made a giant screen. They also introduced iOS. Basically Apple sends an update to the phone and you can download it to improve your phone, or you can keep it the way you want. And what about maneuverability? It was all buttons right? How about a Stylus? It’s good! NO!!! You drop them, they break, you lose them, yuck. But, Apple went further. “……..something we are all born with. Our fingers.” Steve Jobs Keynote. It was a marvel. Until the next one came out.

A year later, the 3G came out. The 3G had some changes. The App Store was introduced for third-party apps. Several hardware changes were made. It also came with GPS and iOS 2.0. Now that was good. But it’s pretty much the same thing. Including the next phone.

The iPhone 3GS. The “S” at the end stood for speed. So higher performance, a 3-megapixel camera with higher resolution that was now able to take a video, and among other things. But the next iPhone truly changed the iPhone.

Another year, another iPhone. iPhone 4 now. It was a bit box like. Although some good things did happen. Screen resolution was higher and faster. Do you know why you don’t have to have Skype to see someone physically? Thank FaceTime. And do you know why we have a Selfie? Thank the iPhone 4. First in it’s kind to have a front-facing camera. Unfortunately, something devastating happened.

As the iPhone 4S came out, Apple announces the death of Steve Jobs. A sad time. The “S” didn’t stand for Steve, but for Siri, the funny, but helpful virtual assistant. The original Siri’s voice was not known until much later. You hear her voice everywhere. Airports, railway, everywhere. The name? Susan Bennett. Thank her for being the best math teacher ever. A tip. Ask Siri what Zero divided by Zero is.  A 8 megapixel camera came with 1080p video recording.  It debuted with iOS5,  iCloud, iMessage, Notification Center, Reminders, and Twitter integration.

iPhone 5 was next. It was a tad smaller. It also introduced the lightning port as apple though that a big 30 pin connector was a hassle to plug in. Yuck. The iPhone 5C didn’t help. Although it had a color case, it was actually slower than the 5. The 5S however, was a angel. Security was starting to become an issue. So, instead of plugging in your Four-number pin, you can touch the home button, and then your in. This is called in Touch ID. Amazing. The White/Gold combination was born with this phone too.

The iPhone 6 and 6 Plus is a huge jump. Big screen for 6. Biggest Screen for 6 Plus. It also improved LTE and Wifi capability. Although that was good, the phone was very susceptible to bending or “bendgate” as they called it.  It also had more flaws with the phone. It was useless to some.

The iPhone 6S and 6S Plus was a bit different. No it won’t bend as it’s built with a stronger alloy. Better LTE was included. Improvements to the Touch ID system. 3D Touch was introduced and is pressure-sensitive inputs from the finger. Basically, if you hold down on an app, you can do something without opening it. Not all the apps do this, but it is handy to hop from place without pressing the home button so much. Unfortunately, all that umph is powered by a battery which was reported to be bad. It apparently had a short battery life. But, it still looks good.

The iPhone SE was pretty good too. “SE” stands for special edition if you’re wondering. It was basically an iPhone 5 or 5S running on steroids. But, all the equipment comes from the 6S. And, you now get Apple Pay, always-on Siri activation, Live Photos, and the Rose Gold color.

The iPhone 7 and 7 Plus jump was huge. Since Samsung and other companies have waterproofed their phones, Apple did their phone to the same specifications. Although it did not reach the IP68 rating, it did receive IP67. Which is still good. Many improvements came. Colors of Jet Black, Matte Black, and (PRODUCT) RED were released. The home button, instead of being a physical one, it is now not physical. Apple has increased the capacity of their Taptic Engine so now it can mimic the feel of a press of a button.  The cameras were huge too. The rear camera, or cameras are awesome. There is that normal lens, but there is now a telephoto lens so now you can get closer into the subject without losing quality of the photo. Apple then has plucked up the courage to remove the headphone jack from its phone. Now, ok. Now there is one less place for water to get in and, another speaker. So, more noise out loud. But, there is a new problem. What happens to the people would needed that headphone jack? Well, Apple has included a lightning connector to headphone jack connector. Now then, there is another problem. Now you cannot charge your phone while listening to music. So, Bluetooth headphones such as Beats and the Apple Airpods. Now these cost money and battery life to operate the Bluetooth, but for some, it’s worth it.

So now lets talk about the new iPhone. From the iPhone to now, 10 years have passed. Many technologies and crazes have come an gone within that time. One decade of screwing around and being super protectant about something. So. Let’s reinvent and refine the phone. The iPhone. So, let’s turn the camera vertically. Make that gloss finish like on the iPhone 4, and then, “make a giant screen.” And, the display is better as well. We have hit the roof with LCD (Liquid Crystal Display). The iPhone 7 displayed the maximum potential of an LCD display. And once you hit the maximum, that’s it. It can give no more. So you have to come up with something else that works. So we did. OLED (Organic LED). And Apple has used this before. On the Apple Watch. So, let’s bring that magic over to the new iPhone, and we’ll make the screen OLED. Now another rumor is going around. Remember when I was talking about Bluetooth and headphones blah blah blah? Rumors are going around about Apple doing Wireless Charging. Ok. Samsung has that already. So. Let’s take that further. Apple is reportedly making the Wireless Charging work in a whole room. So, if you walk into a room with a router sort of device that emits electric waves, it will charge your phone without putting it on a dock or anywhere. Now it will take longer to charge, but hey, less struggle with all the wires for your Mac, Apple Watch, Airpods, you iPhone, and iPad. Now also, Apple is reportedly getting IP68 rating for the iPhone as well. Now remember when I said when the display is one big thing? What happens to the front-facing camera? My Selfie! I also cannot hear anything while talking to someone on the phone. HELP!!! So, it will be integrated into the display. Now, we will lose the home button. What happens to Touch ID? Now this one is less clear. There are two options. Either A. put it on the back of the phone or B. Integrate it into the display. Also, IRIS scanning is also planning to happen as well. So, more security. Now battery. Since more room has been freed from smaller processors and stuff like that. So let’s use that space for battery. Instead of a long rectangle, it is shaped like an L. More battery life is always good for Snapchat people. Amazing things happening. 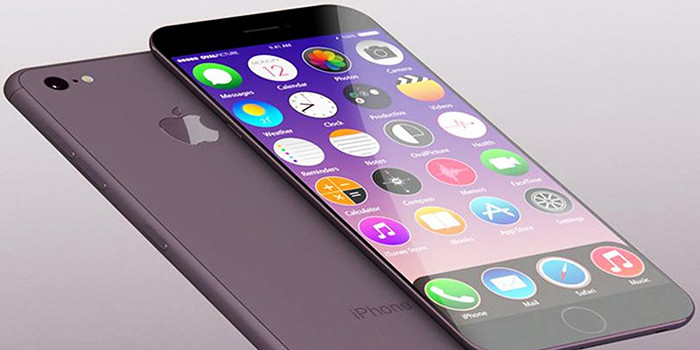 Flickr One of the many concepts that are out for the new iPhone.

Keep a watchful eye on the phone market now.